G4 was showing Flash Gordon last week, and from the opening credits of the classic comic panels, I was swept along a wave of childhood nostalgia and very guilty pleasure. So, while I was watching the lovely smoke special effects, the really bad acting, and the Floating Christmas Ornament of Doom, I was thinking that with the recent slew of reboots, "reimaginings", and "re do the movie to make some bucks" going on, this is a movie that is begging for do over. We are not going to mention that craptacular Sci-FI series from a year or so ago. 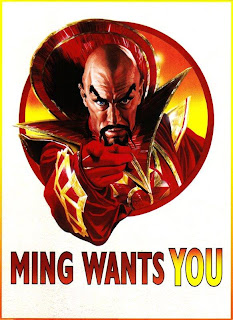 And here are the reasons why -

-Given the amount of original source material from the comics, a good studio could easily draw at least three movies bouncing around the different worlds of Mongo - if the movie is not done in for camp, it could go after the same spirit of its original Saturday morning serials. The subject matter would be perfect for the high adventure approach as long as the director and producers could stay away from the "hip" references, sly jokes, and play it straight. Just remember, what would Indy do. Not what would Will Ferrel do. - keep the opening music and the character themes or suffer the wraith of Ming.

Dale Arden - Megan Fox (I know, way too easy) OR one of the Jessicas - Biel or Alba

Ming the Merciless - Jet Li (easy choice). He can do the physical work and just has to look evil. A bit short though. A more atypical choice? Vin Diesel. He has the imposing stature, menacing look, commanding voice, and can turn on the devil's charm while running you through with a sword.

Flash Gordon - Jason Statham. Athletic and versatile, just give The Transporter a ray gun and let the festivities begin! You say you want someone different? A "reimagination" of the classic hero? How about Dwayne "The Rock " Johnson? Having proven his mettle as a leading man and real actor, Johnson's charisma combined with his physical presence would make Flash "The Universe's Champion". "The Rock" Vs. Riddick - 'nuff said!

So, we conclude this evening's geek out session. Farewell from the New World.